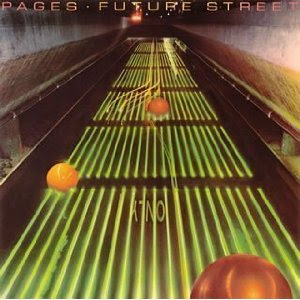 Pages second album “Future Streets” was released in 1979. Richard Page and Steve George dig deeper into the pop-rock territory influenced by their experiences working alongside most of the famous musicians of the time such as Al Jarreau and Kenny Loggins. Once again the result consist of beautifully crafted songs enhanced by the amazing work of their studio musician counterparts. Although the so called “West Coast” pop-rock sound is brilliantly portrayed, the rhythm arrangements and the instrumental performances are upgraded a notch to complement these great compositions. Personnel are: Richard Page vocals, bass and keyboards, Steve George on keyboards and vocals, Charles "Icarus" Johnson, Tim May and Joey Trujillo on guitars, Russell Battelene and George Lawrence on drums, Jai Winding on keyboards, Jerry Manfredi on bass, Don Alias and Claudio Slon Percussion, Michael Brecker on saxophone plus the horn section of Jerry Hey (arranger), Chuck Fidley, Lew McCreary, Bill Reichenbach Jr., Larry Williams and background vocals by Kenny Loggins and George Hawkins. Produced by Bobby Colomby.