Mac McAnally - Nothin' But The Truth 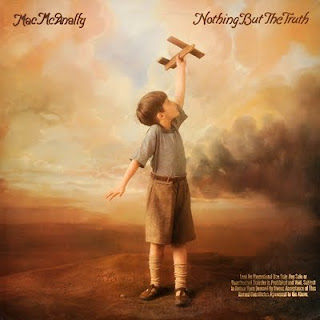 Songwriter, guitarist, vocalist and producer Mac McAnally has assured his place in music history. McAnally draws from his Red Bay, Alabama birthplace, his Belmont, Mississippi hometown roots and from his Muscle Shoals musical foundation, and at the other end McAnally offers the best of his vocal abilities, songwriting, instrumental gifts and production talents. He signed his first record deal, with Ariola, at 20 and launched two singles to moderate success, "It's A Crazy World" and "Minimum Love". Kenny Chesney cut Mac's "Down The Road" and the song reached the No. 1 spot in the spring of 2009. Alabama took his "Old Flame" to No. 1 in 1981. Jimmy Buffett, Hank Williams, Jr., Reba McEntire, T.G. Sheppard, David Allan Coe, Shenandoah, Ricky Van Shelton, Charley Pride, Randy Travis and Steve Wariner are just some of the artists who have cut McAnally's songs over the years. McAnally also became an in-demand producer, along the way working with Ricky Skaggs, Restless Heart, Chris LeDoux, Jimmy Buffett, Little Feat and Sawyer Brown. Meanwhile, as a musician, his guitar and vocal skills continue to build an enviable registry of credits that include Roy Orbison, Hank Williams, Jr., Amy Grant, Jimmy Buffett, Travis Tritt, Linda Ronstadt, Mary Chapin Carpenter, Dolly Parton and many more. In 2007, McAnally was inducted into the Nashville Songwriters Hall of Fame and in 2008 the Mississippi Musicians Hall of Fame followed suit. Even in the midst of creating a prodigious body of behind-the-scenes work, McAnally always continued to make his own music. He has recorded 10 albums. He was the first artist signed to David Geffen's legendary rock label Geffen Records, and that’s when he released “Nothing But The Truth” in 1983. There's just something special about this album from start to finish, the tight playing, the crisp production, the hair raising vocals and harmonies and the intelligent and poetic lyrics, which in all created a very good pop album with just a hint of country roots, where McAnally has headed ever since, culminating with McAnally's triumphant return to the airwaves with a recent No. 1 single (as a writer and an artist) and the release of his new self-penned album “Down By The River

”, under a prominent Nashville label. These are all significant pieces of this breathtaking career canvas of a fully developed and self contained music maker who is confirmed as one of the most accomplished and revered creative forces in the music business. Musicians: Mac McAnally on vocals, guitars and keyboards, Duncan Cameron, Hugh McCracken, Kenny Mims and John Willis on guitars, David Hood and David Hungate (Toto) on bass, Brandon Barnes, Clayton Ivey and Steve Nathan on keyboards, Roger Hawkins and James Stroud on drums, Tom Roady on percussion, Randall Bramlett on saxophone and background vocals by Robert Byrne, Mike Cunningham, Lenny LeBlanc, Sarah McAnally & Terry Woodford. Produced by Clayton Ivey & Terry Woodford. This album came out briefly on CD and now is nowhere to be found but you can find a great rip from vinyl on the comments below.

Paul Hyde & The Payolas - Here's The World For Ya 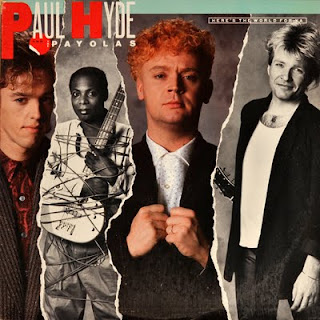 Vocalists Paul Hyde and guitarist-vocalist Bob Rock formed the Payolas with drummer Chris Taylor and bassist Larry Wilkins. After "China Boys" was released on their own Slophouse Records, A&M signed the band and released four albums, “No Stranger to Danger” (1982), “Hammer on a Drum” (1983), “In a Place like This” (1984) and “Here's the World for Ya” (1985). With the release of “Here's the World for Ya”, the record label decided to put lead singer Paul Hyde's name out front in an effort to hang some fame onto a single recognizable person instead of a fairly anonymous group. The tactic didn't really do much for Paul Hyde's own career or the band, though this David Foster-produced album did net the group a few hit singles, including "Stuck in the Rain", the title track and the power ballad "You're the Only Love”. This is a great pop good sounding album featuring David Foster's slick keyboards and amazing production skills, which in this case failed to bring the band onto a truly compelling platform. At the time Foster had just produced albums for Chicago (16 & 17) and The Tubes (The Completion Backward Principle & Outside Inside), which did propel those bands into higher levels. In the case of the Payolas, the album was indeed a great album but maybe at the time, Foster’s production might have contributed to rob the band of a bit of their earlier identity. You can hear traces of Chicago’s sound prominent in Foster’s contributing songwriting, the vocal harmonies and a production sound similar to that of The Tubes on “Outside Inside”. Nonetheless, this is a superb album, full of great songs, an amazing production and craftsmanship as it truly stands the test of time. After breaking up in 1985, Rock and Hyde continued on, releasing a popular single in 1987 called "Dirty Water." Paul Hyde left for a solo career in 1989; Bob Rock later joined the band Rockhead and then became one of the most sought-after producers in the music business. Musicians: Paul Hyde on vocals, Bob Rock on guitars (he also recorded and mixed the album), Chris Taylor on drums and Larry Wilkins on bass with contributions from David Foster and Christopher Livingston on keyboards, Christopher Allen on harmonica, Mark Rousseau on saxophone, Richard Marx, Paul Janz, Henri Lorieau, Sugar Jones, Mark Lafrance, Todd Smallwood and David Foster on background vocals, Steve Porcaro (Toto) on synth programming and horn arrangements by Jerry Hey. "20th Century Masters: The Best of the Payolas

" collects 4 of the 10 songs from this album, "Stuck in the Rain", “It Must Be Love”, “Here’s The World” and “You're the Only Love" and singles and album tracks, including "Eyes of a Stranger", "China Boys", "Never Said I Love You" and "Dirty Water (Rock and Hyde)”. This compilation focuses more on the smoother, poppier side of the band rather than the earlier, punkier work, making it a good overview of this somewhat overlooked band's career. The rest of the album can be found on a link within the comments from a great rip from vinyl.

Buy 20th Century Masters: The Best of the Payolas at Amazo
Posted by Harmonium at 3:13 AM 2 comments: 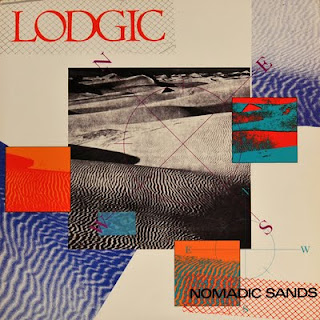 Lodgic was formed by childhood friends Michael Sherwood (keyboards, backing vocals) and Jimmy Haun (guitar) with Gary Starnes (drums) and Mike Hulsey (keyboards), Guy Allison (keyboards) and Michael's younger brother Billy Sherwood (bass and vocals). They recorded their debut and sole album "Nomadic Sands", released in 1985 on A&M Records. The album was co-produced by Steve Porcaro and David Paich (both members of Toto) and producer/recording engineer Tom Knox. “Nomadic Sands” is heavily influenced by progressive icons Yes and by pop craftsmen Toto with a dose of typical 80’s sounds, but the result is a fine debut for a short lived band with plenty of good songs and a great production. Although the album failed to chart in the U.S., the first single "Lonely Man" was featured in the movie Prince of Bel Air, starring Mark Harmon and Kirstie Alley. While Lodgic's output was limited, its legacy was in future collaborations. Lodgic later evolved into the band “World Trade”, which released two albums featuring Billy Sherwood and Guy Allison, “World Trade” and “Euphoria”. Both Sherwoods and Haun later worked with Yes, all three appearing on Yes’ album “Union”. Billy Sherwood and Haun later worked together in The Key, The Chris Squire Experiment and Circa and even performed live extensively with Yes. This album has been released on CD by a German company named YesterRock.

Buy it from YesterRock
Posted by Harmonium at 2:27 AM No comments: 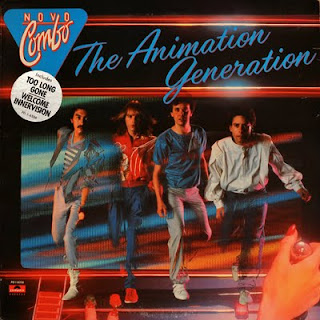 Novo Combo was a rock group which enjoyed some popularity in the early 1980s. The initial lineup was Pete Hewlett on vocals and guitars, Stephen Dees on vocals and bass, Jack Griffith on guitar and drummer Michael Shrieve who played with Santana from the very beginning. Guitarist Carlos Rios replaced Jack Griffith on the band's second album. The band scored minor hits in 1981 with the songs "Up Periscope" and "City Bound" from their debut album “Novo Combo”. “Animation Generation” was their second and last album. Although the style was a product of the era and sort of influenced by The Police, Novo Combo really stood out from the rest, due to its true musicianship and the group interaction brought together by the long live-performing history and great writing skills of its members. Lead singer and bassist Stephen Dees also performed with many other acts such as Hall and Oates and he would later form his own independent pop/art rock band Bandees. Lead guitarist Jack Griffith jammed out with Mick Jagger, Carlos Santana, Gary Moore and now owns a recording studio. Novo Combo's singer and guitarist Pete Hewlett toured with Billy Joel, Carly Simon, Joe Jackson, Julian Lennon, Amy Grant, and Eric Carmen and he made international news while performing with Billy Joel who brought a fully-staged rock production to the Soviet Union in 1985 as part of the first live rock radio broadcast in Soviet history. Michael Shrieve was the original drummer for Santana and at age nineteen, was the youngest performer at Woodstock. He helped create Santana’s first eight albums. Shrieve has collaborated alongside Mick Jagger, George Harrison, Pete Townsend, Steve Winwood, and Andy Summers among others and he continues to produce music for film & TV and many other projects. “Animation Generation” has never been released on CD or downloads but there is a great rip from vinyl, which you can find in the comments below.