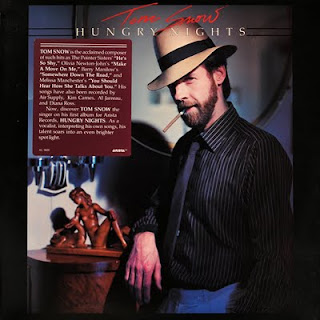 Tom Snow is one of the most respected and recorded songwriters of the 1970s, 80s, and 90s. His work can be found in virtually every genre. Snow has worked and collaborated with the cream of Hollywood’s songwriting talent and with a wide variety of artists as he has spent a lifetime building an extensive and eclectic catalogue of beautifully crafted compositions adapting to any musical genre while honing his craft as a “tunesmith” with a Midas commercial touch. His songs are heard everywhere, such as “Let’s Hear It For the Boy” by Deniece Williams (from the film “Footloose”); “After All” by Cher & Peter Cetera (from the film, “Chances Are”); “He’s So Shy” by The Pointer Sisters; “Make A Move On Me” by Olivia Newton-John; “Somewhere Down the Road” by Barry Manilow; “You Should Hear How She Talks About You” by Melissa Manchester; “If Ever You’re In My Arms Again” by Peabo Bryson; “Don’t Call It Love” by Dolly Parton; “Don’t Know Much” by Linda Ronstadt & Aaron Neville and “Love Sneakin’ Up On You” by Bonnie Raitt. He has won and has been nominated for numerous awards including the Oscar, the Grammy, the Emmy, the Tony and numerous BMI awards, including BMI awards for songs receiving a million or more plays on radio. He also composed numerous songs and soundtracks for Film and TV and he was the composer for the Broadway Musical “Footloose”. Snow studied at Berklee College of Music in Boston. After moving to California to pursue a solo and songwriting career, he signed with Capitol Records as a solo act in 1975 and he produced two albums, “Taking It All In Stride” and “Tom Snow”. In 1982 Snow departed briefly from his songwriting career and with the help of producer/guitarist Dean Parks they produced Snow’s last solo album “Hungry Nights” for Clive Davis’s Arista Records. This album has become one of the most sought after “West Coast Sound” productions as it finds Snow in top notch form as a songwriter. The songs are intimate, beautiful and a strong portrait of Snow delicate commercial touch, which hits you straight in the heart, just as the name of one of his songs. Musicians are: Tom Snow on keyboards & vocals; Dean Parks as producer on synthesizer, bass, saxophone & guitars; Jeff Porcaro, Jeremy Smith, Michael Baird, Ed Greene and Tris Imboden on drums; Lenny Castro on percussion; Leland Sklar, Hadley Hockensmith and Abraham Laboriel on bass, Richard Page, Carol Carmichael Parks and Tom Kelly on background vocals. This album has been released on CD twice, once a few years ago with a different cover and in 2013 as a Japanese Import available at Amazon (Tom Snow Hungry Nights) or at CDJapan. In the meantime here is a great rip from vynil.
Track Listing:
1. Hungry Nights
2. Straight For The Heart
3. Love Hangs By A Thread
4. Our Song
5. Somewhere Down The Road
6. Soon
7. Don’t Call It Love
8. I Almost Let You Go (sampled above)
9. I Think I Know Too Much
10. Time Of Our Lives

Buy Hungry Nights at Amazon or at  CDJapan
Posted by Harmonium at 6:34 AM 1 comment: